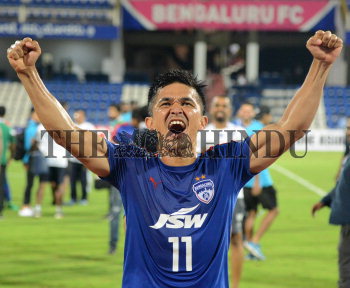 Caption : BENGALURU, KARNATAKA, 31/05/2017: Bengaluru FC team captain Sunil Chhetri jubiliating towards his supporters after the match against Maziya Sports and Recreation Club in the AFC Cup football tournament at the Kanteerava Stadium in Bengaluru on May 31, 2017. BFC beat Maziya Sports and Recreation Club by 1-0 and entered into the AFC Cup inter-zone play-off semifinal. Photo: V. Sreenivasa Murthy