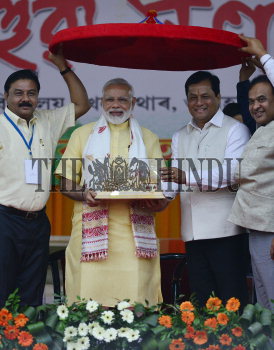 Caption : Guwahati, Assam, 26-05-2017: Prime Minister Naredra Modi waves to the crowed while going to address the nation on the occasion of the completion of three years of the NDA government at the Centre and one year of the first BJP-led government in Assam in Guwahati on May 26, 2017. Also seen in the picture Assam Chief Minister Sarbananda Sonowal, Assam Education and Health Minister Hemanta Bishwa Sarma. Photo: Ritu Raj Konwar