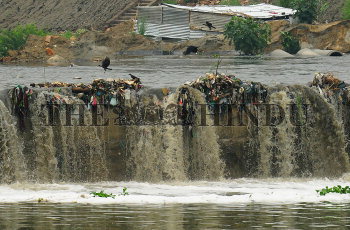 Caption : LUCKNOW, UTTAR PRADESH, 21/06/2016: The Comptroller and Auditor General of India has noted in its latest report (March 31, 2016) that Lucknow is more polluted on parameters of air pollution, water pollution and municipal solid waste than Varanasi, here is the scene of river Gomti at Lucknow on June 21, 2016. Photo: Rajeev Bhatt