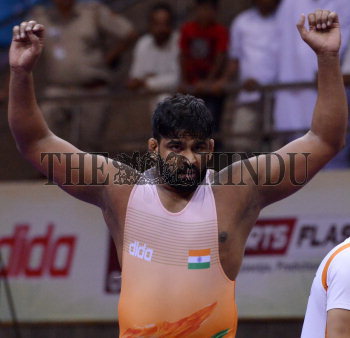 Caption : NEW DELHI, 14/05/2017: India's Sumit Kumar celebrates after winning the silver medal. He lost to Yadollah Mohammadkazemi Mohebi of Iran in the gold medal round of the men's 125kg freestyle class on the final day of the Asian Wrestling Championship at IGI Stadium in New Delhi on May 14, 2017. Photo: Shiv Kumar Pushpakar