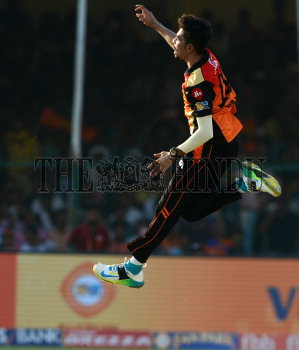 Caption : KANPUR, UTTAR PRADESH, 13/05/2017: Sunrisers Hyderabad's Mohammed Siraj, who was adjudged Man of the Match after claiming 4 wickets against Gujarat Lions, celebrates one of the wickets during the Indian Premier League (IPL) 2017 Twenty20 cricket match at Green Park Stadium in Kanpur on May 13, 2017. Photo: Rajeev Bhatt