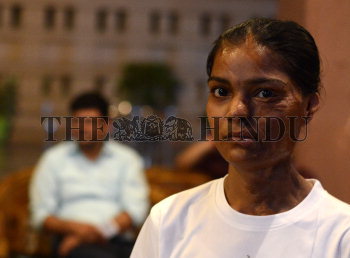 Caption : Lucknow, Uttar Pradesh , 07/05/2017: ACID ATTACK VICTIMS CAFE-SHEROES (to go with Omar's item): One of the acid attack victims, Kunti who had been attacked by her husband, works at the Acid Attack Victims run cafe, Sheroes at Lucknow. In 2014, Under Chhanv Foundation this model project was started with a sole purpose of helping acid attack survivals in treatment, employing in cafe and bringing them into main stream of society initially started at Agra prior to Lucknow and Jodhpur. Photo: Rajeev Bhatt