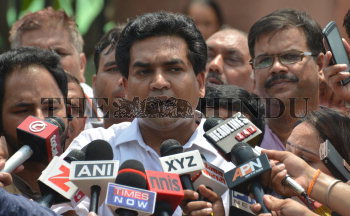 Caption : NEW DELHI, 07/05/2017: Sacked Former Delhi Tourism and Water Minister Kapil Mishra addressing the media at the Raj Ghat on Sunday, claimed he saw former fellow cabinet colleague Satyendar Jain giving Chief Minister Arvind Kejriwal Rs. 2 crore and demanded to know what the money was for. Mishra heightened suspense on Sunday morning ahead of a press conference at Rajghat, saying he had seen “him” take illegal cash, without identifying the person, he was removed from his post on Saturday, has claimed that a conspiracy is being hatched against him due to the alleged Rs 400-crore water tanker scandal on Sunday. Photo: R.V. Moorthy