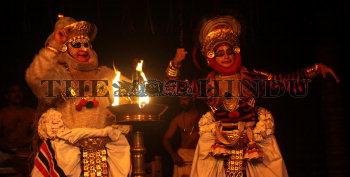 Caption : Kochi, Kerala, 06/05/2017: Sooraj Nambiar as Bheemasenan and Pothiyil Renjith Chakyar as Hanuman in 'Kalyanasougandhikam' Koodiyattam held at Ammannur Gurukulam, Irinjalakuda. Kudiyattam, Kerala's traditional Sanskrit theatre is believed to be 2,000 years old. It is officially recognised by UNESCO as a Masterpiece of the Oral and Intangible Heritage of Humanity. Photo : Thulasi Kakkat