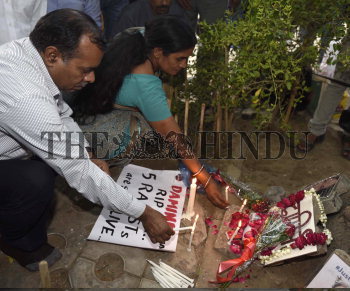 Caption : NEW DELHI, 05/05/2017: Nirbhaya's parents Asha Devi and BADRI Singh light candles at Jantar Mantar soon after the pronouncement of judgment at the Supreme Court in New Delhi on Friday. The apex court has confirmed death sentence for the four convicts of Nirbhaya gang rape case who raped and tortured the 23-year-old medical student on a moving bus in Delhi on her way home on December 16, 2012. Photo: Shiv Kumar Pushpakar