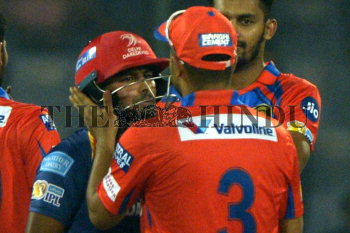 Caption : NEW DELHI, 04/05/2017: Delhi Daredevils batsman Rishabh Pant being greeted by Suresh Raina for his performance (97 off 43 balls) after he was dismissed, caught by wicketkeeper Dinesh Karthik off Basil Thampi, during the Indian Premier League (IPL) 2017 Twenty20 cricket match between Delhi Daredevils and Gujarat Lions at Ferozeshah Kotla in New Delhi on May 04, 2017. Photo: Sandeep Saxena