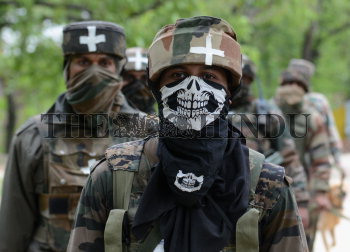 Caption : Srinagar, Jammu and Kashmir, 04/05/2017: Army jawans patrol during crackdown in Shopian, about 55 km from Srinagar on May 04, 2017. Helicopters and drones circled the air and more than 4,000 troops fanned out across south Kashmir's Shopian district in a massive operation to flush out militants holed up inside homes. PHOTO: NISSAR AHMAD