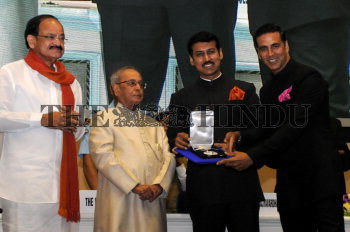 Caption : NEW DELHI, 03/05/2017: Actor Akshay Kumar poses for photograph after receiving Best Actor award from President Pranab Mukherjee at the 64th National Film Awards function in New Delhi on Wednesday. I and B Minister M. Venkaiah Naidu and Minister of State for I and B, Rajyavardhan Singh Rathore are also seen. Photo: Shanker Chakravarty