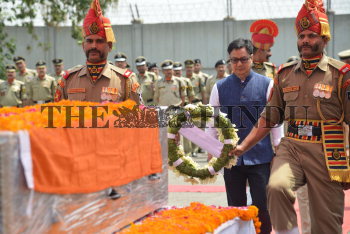 Caption : NEW DELHI, 02/05/2017: Minister of State for Home Affairs Kiren Rijiju pays his respect to BSF Head Constable Prem Sagar at Palam in New Delhi on Tuesday. Sagar was one of the two soldiers killed and their bodies mutilated by the Pakistan Army on the Line of Control (LoC), Indian Army's Director General of Military Operations (DGMO) Lt. Gen. A.K. Bhatt expressed “grave concern about the incident” in the weekly conversation with his Pakistani counterpart, who rejected it as “baseless.” Photo: V.V. Krishnan