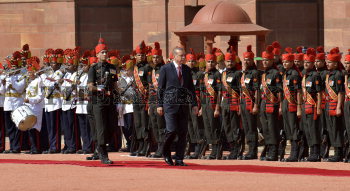 Caption : NEW DELHI, 01/05/2017: President of Turkey, RECEP TAYYIP ERDOGAN inspecting a Guard-of-Honour, during a ceremonial RECEPtion at the forecourts of Rashtrapati Bhawan, in New Delhi on Monday. Photo: V. Sudershan