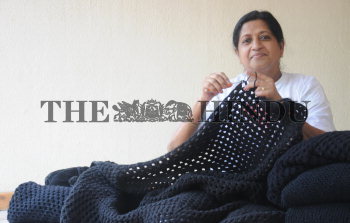 Caption : Kochi, Kerala, 29/04/2017: Rani Thomas, a housewife from Vaduthala in the city is busy knitting blankets, which will be part of the giant blanket depicting the face of the late Nelson Mandela to be unfurled in South Africa next April. She is also the ambassador of the charity organisation 67 Blankets, which is organisaing the initiative. Photo : Thulasi Kakkat