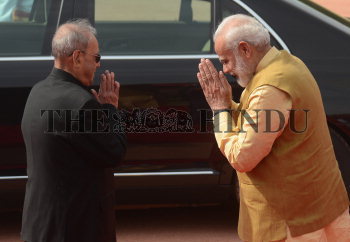 Caption : NEW DELHI, 28/04/2017: The President Pranab Mukherjee with Prime Minister Narendra Modi during ceremonial reception to President of the Republic of Cyprus, Nicos Anastasiades (not in pic) at Rashtrapati Bhawan, in New Delhi on Friday. Photo: Sandeep Saxena