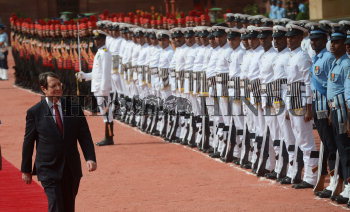 Caption : NEW DELHI 28/04/2017: The President of the Republic of Cyprus, Nicos Anastasiades inspecting the guard of honour, at the Ceremonial Reception at Rashtrapati Bhavan in New Delhi on Friday. Photo: Sandeep Saxena