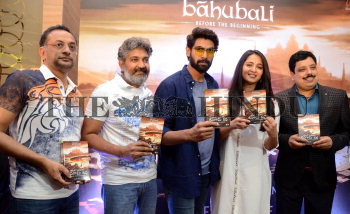 Caption : HYDERABAD, TELANGANA, 24/04/2017: Team members of the blockbuster film Bahubali at the promotion of "Bahubali - 2" during a press conference in Hyderabad on April 24, 2017. Bahubali T Shirts, Bahubali - The Game by Mark Skaggs and Tanay Tayal from Moonfrog Labs, and Shivagami Katha Bahubali Bhagam 1 by author Anand Neelakantan, were launched at the press conference. Posing with the book are Director S.S. Rajamouli, Producer Shobu Yarlagadda of Arka Media, actors Rana Daggubati and Anushka Shetty, and author Anand Neelakantan. Photo: Nagara Gopal