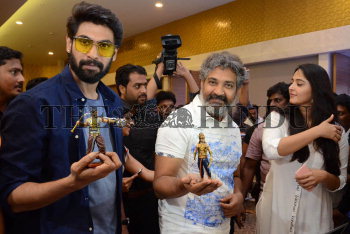 Caption : HYDERABAD, TELANGANA, 24/04/2017: Team members of the blockbuster film Bahubali at the promotion of "Bahubali - 2" during a press conference in Hyderabad on April 24, 2017. Bahubali T Shirts, Bahubali - The Game by Mark Skaggs and Tanay Tayal from Moonfrog Labs, and Shivagami Katha Bahubali Bhagam 1 by author Anand Neelakantan, were launched at the press conference. Seen in the pciture are Director S.S. Rajamouli, actors Rana Daggubati and Anushka Shetty. Photo: Nagara Gopal