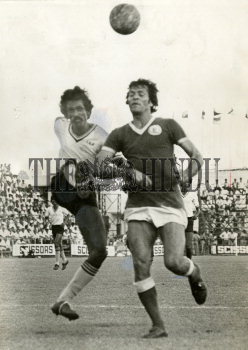 Caption : Vijay Kumar lobs a pass as JCTschemer Manjit Singh 'feels' his ribs during the Fifth Federation Cup football tournament between J.C.T. and ICF. at the Nehru Stadium in Madras on April 17, 1981. (Published in The Sportstar on May 02, 1981) PHOTO: THE HINDU ARCHIVES