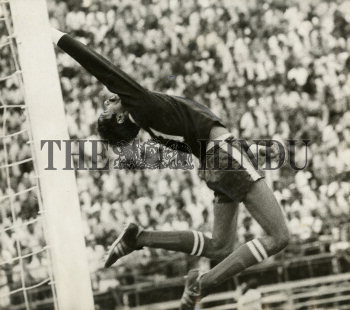 Caption : Pliable as Plastic Man is Brahmanand under the Salgaocar bar as he scotches a Reserve Bank threat. during the Fifth Federation Cup football tournament at the Nehru Stadium in Madras on April 22, 1981. (Published in The Sportstar on May 02, 1981) PHOTO: THE HINDU ARCHIVES