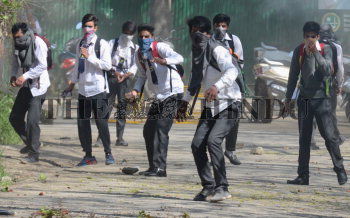 Caption : Srinagar, Jammu and Kashmir, 17/04/2017: Students clash with police during a protest at SP College in Srinagar on April 17, 2017 after the students of SP College staged a protest on the MA Road to express their anger against the last week’s Pulwama Degree college incident where more than sixty students suffered injuries in forces’ action. PHOTO: NISSAR AHMAD