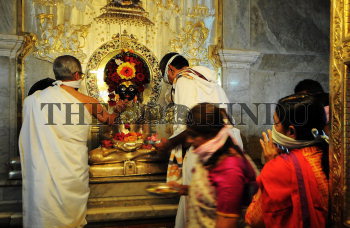 Caption : Mumbai, Maharashtra, 09/04/2017: Mahavir Jayanti has been observed by Jains in Mumbai on 2615th Birth anniversary of sage Mahavir, also known as Vardhamana, established the core tenets of Jainism. He was the 24th and the last Jain sage, born on thirteenth day of the rising moon of Chaitra month during 599 B.C. at Kundalagrama, which is situated under Vaishali district in Bihar. It is believed that he was disappeared in 527 B.C. at the age of 72. Here people are seen offering prayer to the sage at Babu Amichand Panalal Jain Temple in Walkeshwar. Photo: Arunangsu Roy Chowdhury