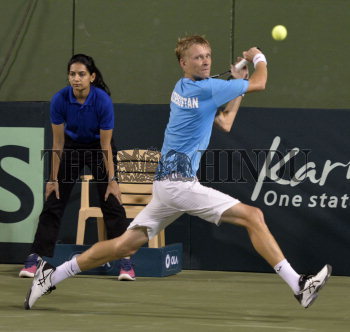 Caption : BENGALURU, KARNATAKA, 07/04/2017: Uzbekistan's Sanjar Fayziev playing against India's Prajnesh Gunneswaran during the second match of the Davis Cup Asia-Oceania Group I tennis tie between India and Uzbekistan at the KSLTA Courts in Bengaluru on April 07, 2017. Photo: V. Sreenivasa Murthy