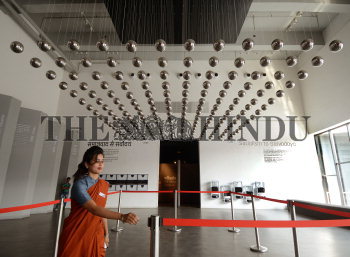 Caption : LUCKNOW, UTTAR PRADESH, 06/04/2017:JAIPRAKASH NARAYAN MUSEUM OF SOCIALISM: Museum of Socialism at Jaiprakash Narayan International Centre in Lucknow. History remembers Narayan (1902-1979) popularly referred to as JP or Lok Nayak, was an Indian independence activist, social reformer and political leader, who facilitated change—someone who had the courage to take on the Prime Minister of the country, and eventually became the rallying point for more than a million people during a dark period of political turmoil, i.e., the Emergency.The museum, too, in a way, reflects his personality with contemporary and modern—and to a certain extent, unconventional—shapes, which, surprisingly enough have simple, clear-cut clean lines. Un-fussed, just like the man was. Red terracotta tiles make up the façade, and once you enter through a formidable arch (20m wide and 9m high), you have the option of either going down to the basement; one part of which has a floating pavilion. Or, up through the red spiral staircase to the galleries featuring different exhibits. The space incorporates a reading room, a library, a museum and steps, which double up as seats in an amphitheater. Photo: Rajeev Bhatt