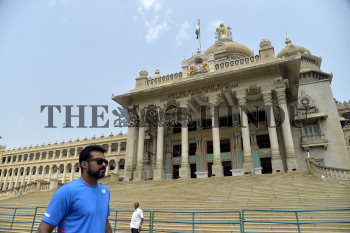 Caption : BENGALURU, KARNATAKA, 06/04/2017: India's Leander Paes passes by the Vidhana Soudha during the draw ceremony on the eve of the Davis Cup Asia Oceania Group I tennis tie between India and Uzbekistan at KSLTA Courts in Bengaluru on April 06, 2017. Photo: V. Sreenivasa Murthy