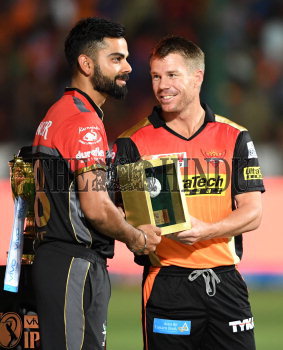 Caption : HYDERABAD, TELANGANA, 05/04/2017: Sunrisers Hyderabad captain David Warner (right) presents a memento to Virat Kohli, captain of Royal Challengers Bangalore during the opening ceremony before the first match of the Indian Premier League (IPL) Twenty20 Championship 2017 between the Sunrisers Hyderabad and the Royal Challengers Bangalore at the Rajiv Gandhi stadium in Hyderabad, India on the April 05, 2017. Photo: K.R. Deepak