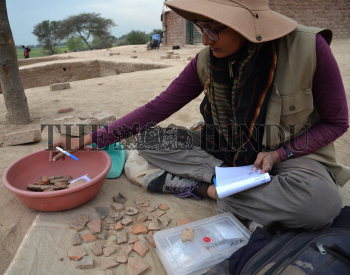 Caption : Anupgarh, Rajasthan, 14/03/2017: ASI student documents recovery from the pits at the site, Binjor – 4MSR is an archaeological site, near the international border between Punjab and Rajasthan. It is situated a couple of kilometers from Binjor village, along the Ghaggar river (Ghaggar - Hakra River) valley and excavated by Archaeological Survey of India (ASI), is widely considered as an Early Harappan and Mature Harappan site (Indus Valley Civilization). There are no indications that a Late Harappan phase existed. In the Ghaggar river valley, explorations and excavations had been done in several sites like Kalibangan, Rakhigarhi and Baror. “The purpose of the present excavation at 4MSR is to learn about the Early Harappan deposits, relationship with other contemporary sites and to fill the GAP between the Late Harappan phase and the Painted Grey Ware culture", headed by Sanjay Manjul, Director, the Institute of Archaeology and head of the excavation at 4MSR. Photo: V. V. Krishnan