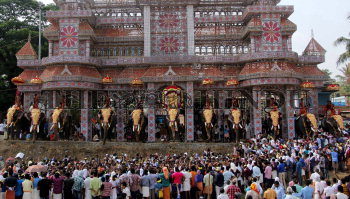 Caption : Palakkad, Kerala, 03/04/2017: Caparisoned elephants of Vallangi desam at a procession held as part of the Nemmara -Vallangi Vela on April 03, 2017 near Palakkad. The Vela is celebrated after the harvest of paddy, when the fields are empty and dry. The festival is believed to be the birthday of the presiding deity Nellikulangara Bhagavathy. There is also a belief that the festival is to celebrate the killing of a demon by the Goddess.The festival falls on the 20th day of ‘Meenam’, the Malayalam month. The two competing villages, the Nenmara and the Vallangi, have their own temples but converge at the common Nellikulangara Bhagavathy temple for the Vela. Photo: K. K. Mustafah