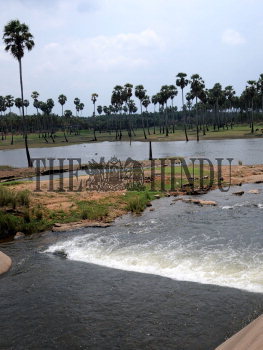 Caption : Palakkad, kerala, 30/03/2017: Water from the Left bank canal merging into the Kambalathara mini-dam in Chittur Taluk, near Muthalamada in Palakkad on March 30, 2017. The state has received its share of 3714 TMC of water in the period from 1 July 2016 to 29 March 2017, through Manakkadavu Weir. Under the Inter- State Parambikulam -Aliyar Project (PAP) agreement, the State was to receive 3536 TMC of water, according to The Joint Water Regulatory Board (JWRB). The release of water from the dams under Parambikulam- Aliyar Project has been fixed as per the norms in the agreement between the two states. Photo: K. K. Mustafah