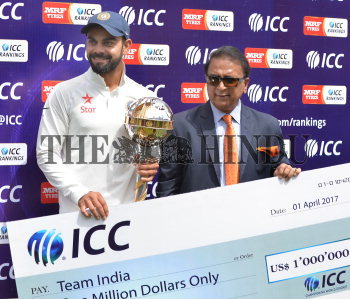 Caption : DHARAMSHALA, HIMACHAL PRADESH, 28/03/2017: Indian captain Virat Kohli with the ICC Test mace and BONUS cheque for One million dollars, presented by Sunil Gavaskar, after the fourth and final cricket Test match between India and Australia at the HPCA Stadium in Dharamshala on March 28, 2017. India won the match by 8 wickets to take the four-Test series 2-1. India retained its top position in the ICC Test team rankings. Photo: V.V. Krishnan