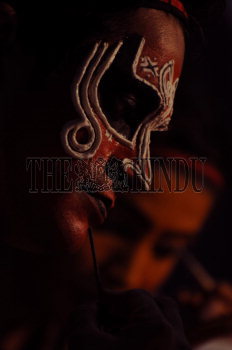 Caption : Kochi, Kerala, 24/03/2017: Koodiyattam actors Sooraj NAMBIAR and Aparna Nangiyar apply makeup before a performance in the city. Kudiyattam, Kerala's traditional Sanskrit theatre is believed to be 2,000 years old. It is officially recognised by UNESCO as a Masterpiece of the Oral and Intangible Heritage of Humanity. Photo: Thulasi Kakkat