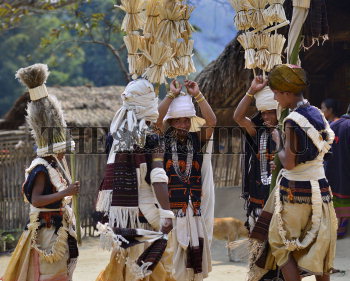 Caption : Karbi Anglong, Assam, 18-03-2017: Tiwa tribal boys wears a headgear call SAKRASHATA which is made of the inner part of a tree and perform their traditional rituals during the Sogra Misawa festival in Karbi Anglong district of March 18, 2017. It is believed that people of Tiwa community who inhabit in the hills are not permitted to prepare their paddy field for the next harvest before performing this ritual. It is a spring time festival of the Tiwas where they worshipped the deities of nature. Photo: Ritu Raj Konwar