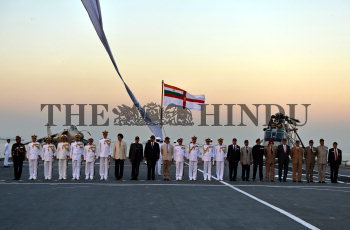 Caption : MUMBAI, MAHARASHTRA, 06/03/2017: Chief of Naval Staff along with Commanding officer and former CO's of INS Viraat pose for the photographs before decommissioning ceremony, held at Naval Dockyard. More than 1700 invitees including Royal Navy officers attended this historic ceremony. INS Viraat, weighing 27,800 tonnes, is the world’s oldest aircraft carrier in service. It had served in the British Navy as HMS Hermes for 25 years from November 1959 to April 1984 and after refurbishment, was commissioned into the Indian Navy in May 1987. Photo: Prashant Nakwe