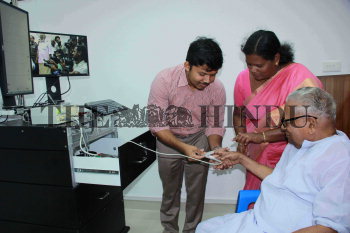 Caption : Palakkad, kerala, 17/02/2017: V.S. Achuthanandan chairman of the Kerala Administrative Reforms Commission checking health condition via VIDEO CONFERENCING after the inauguration of The Early Cancer Detection Centre at Kanjikode, near Palakkad on Friday, a satellite unit of Regional Cancer Centre (RCC), Thiruvananthapuram. The major work in the centre is screening for early detection of cancer cases refered from other hospitals and patients coming voluntarily. Prime importance is also given to conduct cancer detection camps and awareness programmes in remote areas of Palakkad and other northern districts of Kerala. Diagnosed cases were refered to RCC or wherever easly accessible to the patient for proper treatment and management. Photo: K. K. Mustafah.