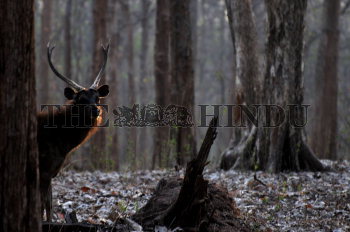 Caption : PALAKKAD, KERALA, 07/02/2017: Taking refuge: A sambar deer at the Walayar deer park near Palakkad on Tuesday, in search of food. The Prolonged drought in the state is not just making life miserable for farmers. Kerala's wildlife population, which relies on rivers, streams and ponds for survival, too is bearing the brunt of scanty rainfall. The drought like situation in Palakkad district forcing the park authorities to bring fodder, including green leaves, for sheltered lower mammals like deer from out side. The Bharathapuzha, the major source of drinking water, is already reduced to a trickle. Its feeders like Gayathripuzha and Korayar have turned fully dry. Despite a report of the State Action Plan on Climatic Change (SAPCC) that had listed Palakkad as one of the climate change hotspots in the State. Photo: K. K. Mustafah