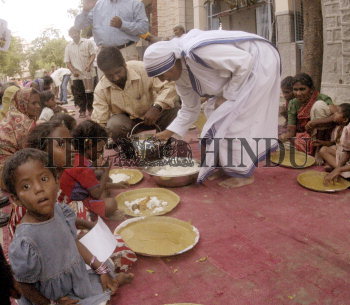 Caption : Country celebrates Mother's Beatification: The NUNS of Missionaries of Charity engaged in poor-feeding in Hyderabad after the mid-day mass in St. Mary's Church in Secunderabad on October 19, 2003. Catholics joined in a special mass and offered prayers on the occasion of the Beatification of Mother Teresa. The occasion also coincided with the 25th year of Pontification of Pope John Paul II . It was a never-before occasion. Beatification is the penultimate step before a person can be canonised as a saint, a miracle worker, recognised by Roman Catholic Church of which the Pope is the head. Mother Teresa would henceforth be referred to as The Blessed Teresa of Kolkata. She has been beatified in record time-- just seven years after her death in 1997. Photo: Mohammed Yousuf