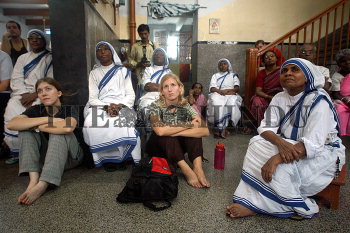 Caption : The nuns of the Missionaries of Charity alongwith foreign volunteers watch the live telecast on television of Mother Teresa's beatification in Rome at the Nirmal Hriday (Kalighat), in Kolkata, the capital of the eastern Indian State of West Bengal, on October 19, 2003. Incidentally, Pope John Paul II visited this home for the old in the year 1986. The Nobel peace prize-winning nun who dedicated her life for the poor and destitutes of Kolkata, was beatified by Pope John Paul II in Rome on October 19, 2003. Photo: Parth Sanyal