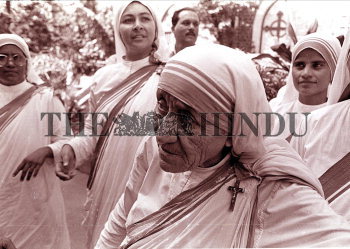 Caption : A file picture of Mother Teresa on her visit to the Missionaries of Charity Mumbai in 1994. Mother Teresa's beatification ceremomy will be held in Rome on October 19, 2003 and will be watched live on television by millions of people worldwide. But NUNS at the orphanage Missionaries of Charity might miss the great event because they do not have a television set. Photo: Paul Noronha