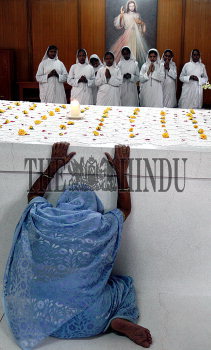 Caption : A woman sits and prays before the tomb of Mother Teresa in the Mother House in Kolkata, the capital of the eastern Indian State of West Bengal, on October 18, 2003. The nuns of the Missionaries of Charity are seen standing in the background. Photo: Parth Sanyal