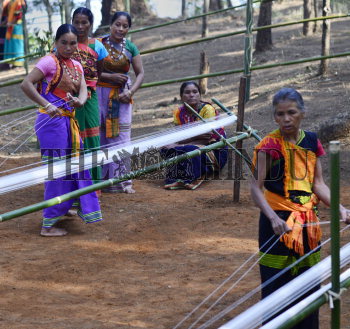 Caption : DIPHU, ASSAM, 12-01-2017: TIWA tribal women takes part in the weaving during the Resangar Tawa ritual, held in the Karbi Anglong district of Assam on January 12, 2017. The ritual is held after every 100 years, where two pieces of ceremonial cloth known as Resangar Tawa are weaved to replace the old pieces. The Resangar Tawa is considered as very sacred and has to be weaved by the women of the Madar clan of the TIWA tribe, who are in the stage of menopause. The two cloth pieces are worn by chief participants in the Sogoramisuwa festival. TIWA is a major tribe of Assam belonging to the Tibeto-Burman linguistic family. The weaving ceremony takes place in a sacred place at the top of a hill where a temporary camp is setup to weave the cloth pieces. The weaving may take one week or more and till its completion the people stay in the camp. Photo: Ritu Raj Konwar