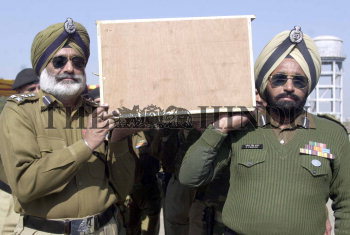 Caption : BSF officers carrying the coffin of a slain soldier, who was killed outside the CM`s residence at Maulana Azad Road in Srinagar on October 17, 2003. Two militants and two BSF soldiers among 21 Security Force personnel were injured during the 24-hour gunbattle. Photo: Nissar Ahmad