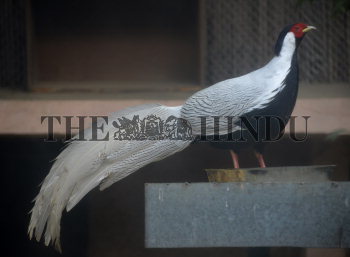 Caption : NEW DELHI, 11/01/2017: A Silver Pheasant in its enclosure at the Delhi Zoological Park which was re-opened after 84 days after several birds died due to bird flu, all other parks — Shakti Sthal near Rajghat, Hauz Khas Deer Park, District Park in Paschim Vihar and a WATERBODY in Madipur — that were also shut down to the Avian Influenza virus have been re-opened, in New Delhi. Photo: V.V. Krishnan