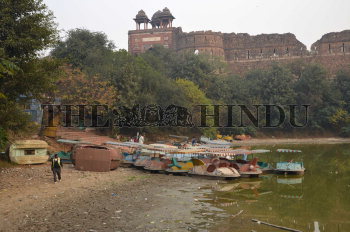 Caption : NEW DELHI, 09/01/2017: The moat along Purana Quila or Old Fort which was a popular for boating has been drying up, the Delhi Zoological park which has been re-opened recently after being closed for three months after several birds died due to bird flu, in New Delhi. Photo: V.V. Krishnan