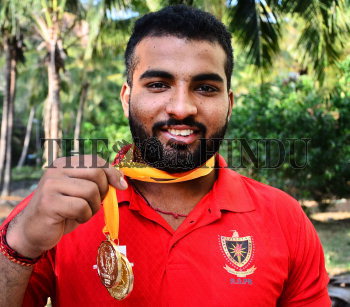 Caption : TIRUNELVELI, TAMIL NADU, 29/12/2016: Pardeep Singh of Railways, who won the gold in the MEN's 94 kg category in the 69th MEN's senior National weightlifting championship at Nagercoil on December 29, 2016, celebrates with the medal. Photo: A. Shaikmohideen