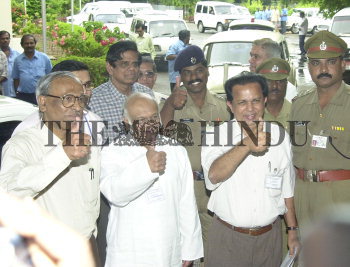 Caption : The ISRO Chairman Madhavan Nair (second right) after Resourcesat was put in orbit by PSLV-C5 from Sriharikota in Andhra Pradesh on October 17, 2003. On Madhavan Nair's right is the Union Minister of State for Space, Satyabrata Mookherjee and K. Narayana. The eighth flight of the Indian Space Research Organisation's workhorse launch vehicle, the Polar Satellite Launch Vehicle(PSLV), placed a land use spacecraft, the Indian Remote Sensing Satellite Resourcesat-1 in an 821 km-high polar Sun Synchronous Orbit. The satellite was launched from the Satish Dhawan Space Centre at Sriharikota. Photo: S. Thanthoni