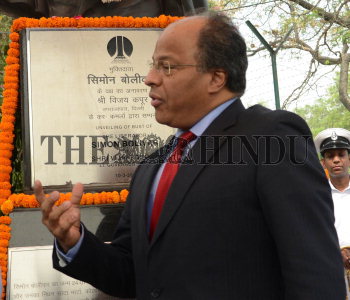 Caption : NEW DELHI, 19/04/2016: Augusto Montiel, Ambassador of Bolivarian Republic of Venezuela with Lt. Governor Najeeb Jung (not in picture) during the inauguration of the Bolivar SQUARE to commemorate the 206th Anniversary of the First Declaration of Independence of the Republic of Venezuela at Sardar Patel Marg, in New Delhi on Tuesday. Photo: V. Sudershan