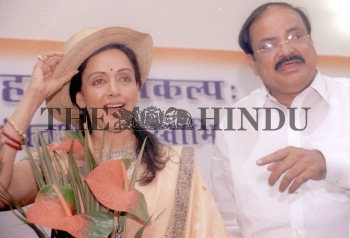 Caption : Actress HEMA Malini with the Bharatiya Janata Party president, Venkaiah Naidu, at a felicitation function on her behalf at the latter's residence in New Delhi on October 16, 2003. HEMA Malini took oath as a member of the Rajya Sabha in New Delhi on her 56th birthday on 16th October. Photo: Rajeev Bhatt