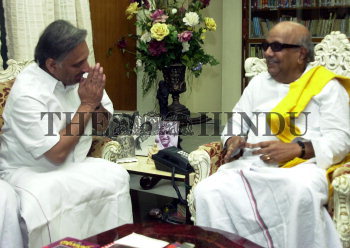 Caption : DMK President M Karunanidhi met Mayiladuthurai Congress(I) MP Mani Shankar Aiyar at his residence in Chennai on October 15, 2003. Mr. Karunanidhi condemned the attack on Mani Shankar Aiyar. Mr. Aiyar was attacked at Vanchur, near Karaikal by a group of persons allegedly belonging to the AIADMK. He was attacked following a spat between Mr. Aiyar and the Chief Minister, at the Government function in Karaikal. Photo: K.V. Srinivasan.