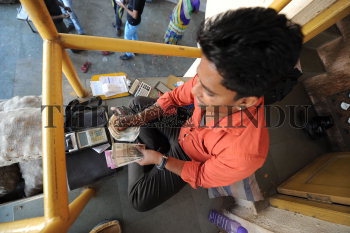 Caption : AHMEDABAD, GUJARAT, 23/11/2016: DEMONETISATION EFFECT: A businessman counts of new Rs 500 / 2000 currency at APMC Wholesale Market of Potato, Onion and Garlic in Ahmedabad on November 23, 2016. According to Wholesale traders business almost down by 40% due to Demonetisation. Prime Minister Narendra Modi on 8th November 2016, declared the bulk of Indian currency notes no longer held any value and told anyone holding those bills to take them to banks. Photo : Vijay Soneji.